EIT-ICT Connected textiles was a one-year project for 2013, with overall funding of over 1MEur, divided to project partners. The consortium involved companies and universities across Europe, with each of the partners having different amount of catalyst tasks: Deutsche Telekom (4 tasks), Philips (2 tasks), TU München (1 task), U Twente (2 tasks), TU/e (2 tasks) and Aalto ARTS (4 tasks). I was the task leader in all Aalto ARTS tasks, and I received an overall EIT-funding of 75000eur. As the overhead costs were minimal, the actual impact of the funding was much greater than of typical external funding. I also participated in the hands-on development, organized workshops, and oversaw related the subcontracting in our tasks. The tasks within the project consisted of Technology transfer, Professional training, Mobility program and a workshop.

Technology transfer was initiated by our advances in 3D-printing in relation to wearables, and using that as a starting point for developing a case example, which lead to the creation of OJAS, a bi-directional inductive energy transfer module. Professional training focused on developing a course for eTextile teaching. Mobility program was used for my three-month visit to Berlin, where Deutsche telekom labs and Universität der Künste are located, and the workshop required us to organize one at Aalto ARTS, with a focus on patenting. The workshop was arranged in a collaboration Dr Jorma Lehtonen, who is the Head of Division (Mechanical engineering) at Finnish Patent and Registration Office (PRH). This collaboration has been continued on Interactive Prototyping.

Technology-transfer program was used to create the OJAS-prototype[1]. OJAS is a module intended for easy prototyping of wireless energy transfer, and it is specifically created to be flat and suitable for wearable use. The major implication of the module is, that when used with re-chargeable batteries, the module can be used for both charging, as well as discharging the batteries. Two versions were designed, one for energy-only, and another one which includes also optical data transfer. Another benefit of simple version of OJAS is that it is analogue. From the designers point of view, it is similar to a cable in functionality: DC-voltage in, DC-voltage out. The direction of the current flow is also similar to a cable: from higher voltage to the lower. Each module is the same, and they can be utilized with just a basic skill-set in electronics, such as that of a design student.
It was developed together with a Finnish company iCraft Oy. I managed the request for tenders, after which the rapid development was begun. During the summer, we collaborated intensely on the development of electronics, and had the modules ready for the Mobility program, where I organized two workshops: one for using OJAS, and another one for the future development of OJAS. The final version of OJAS is shown in Figure 1. 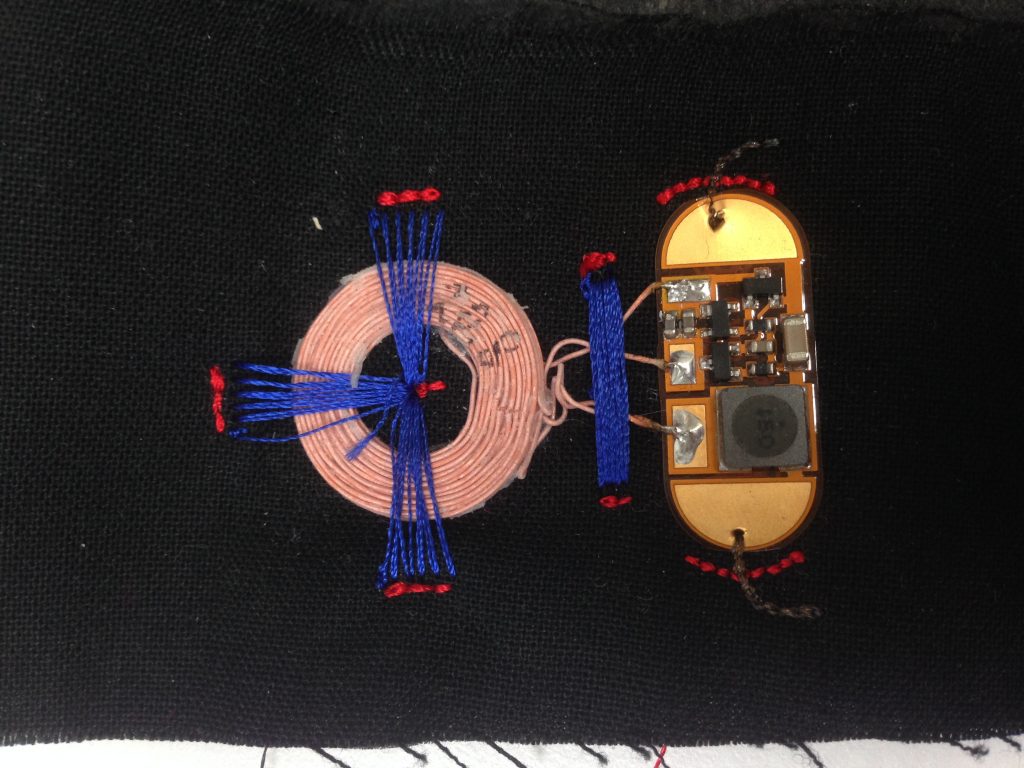 OJAS has been fairly successful for a one-year research project outcome. Three Master-level theses have been completed, which directly utilize the OJAS-module. Silvain Toromanoff [2] created a safety-system for pre-schoolers, where the jackets of the children are lit up with the help of a wireless power system. Aino Aarnio-Juurinen[3] and Visa Kupias [4] developed a wirelessly powered heating system for cold-water scuba divers, where the battery with a set of OJAS is on a removable belt. Aino and Visa have also won 2015 Metex award[5] for the novelty of the idea, in addition they have received a special mention in the reshape competition[6]. It has been used at Universität der Künste, in their prototypes [7], as well as demonstrated in other prototypes through ARCINTEX network (Eindhoven, October), and the WEAR-IT (Berlin, October), the EU-parliament (Brussels, November) and the eTextile Summer-camp (Poncé sur le Loir, July) exhibitions in 2014. OJAS was successful already during the project, and the task received more money later in the project, to have a larger batch manufactured and distributed to the consortium partners.

Professional training-task was used to develop teaching, as well as subcontracting the development of a parametric module for 3D-printing connectivity-components for textiles. The task focused on two courses, the Interactive Prototyping in the spring, as well as the wearable textiles -course in the Autumn. While the interactive prototyping was discussed as a separate project, it was the basis for developing the wearable textiles course.
During the Autumn course, students created prototypes, which also utilized OJAS from the technology transfer. One of the prototypes, Musical Hoodie shown in Figure 2., implemented a novel way of using textile interactions for controlling a MP3-player: the hood-cords could be used with different modalities based on the affordances by shape, as well as material and by textile structure. Textile structure provided the visual aesthetics, as well as controlled paths for the electric signals. The material selections provided different electrical properties, which could be utilized in the electric circuits. The textile structure allowed them to be used as a cord-like user interface. The hoodie has been used as an example of wearable interaction, and was also presented at CHI-interactivity in 2014[8] due to its use of OJAS. 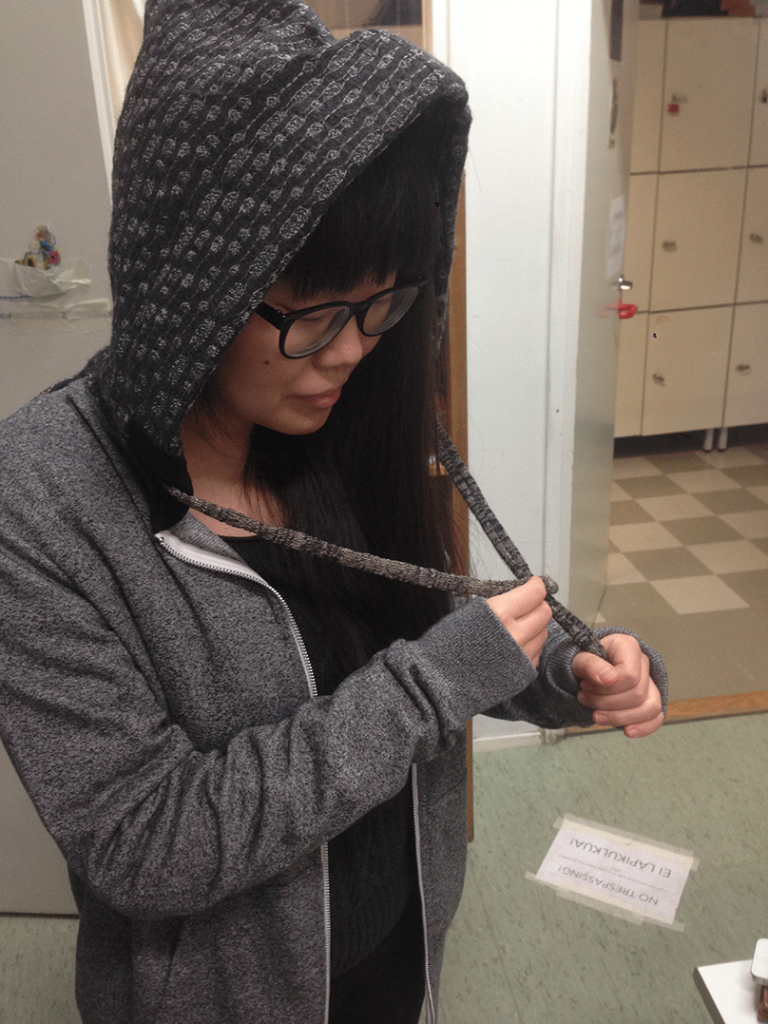 Also, during the task, we (Me, with students Liisa Pesonen and Valtteri Wikström) came up with an invention of a 3D-printed vest usable as a bullet-proof vest and a sound amplification device, of which an invention claim was filed to Aalto ARTS.

Results of this task supported my idea of starting an international teaching collaboration, which has been now organized twice in Berlin.